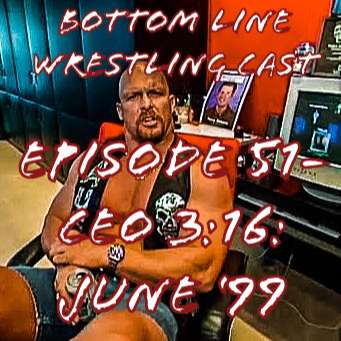 This week Mike & JV will discuss Stone Cold’s time as CEO of the World Wrestling Federation after being screwed out of the WWF Championship at Over the Edge and the reveal of Vince McMahon as the Greater Power. Stone Cold challenges Vince & Shane McMahon to a handicap match at King of the Ring. Vince accepts but he wants it to be a ladder match for total control of the WWF!

Check out our Special Edition Watch Along: Stone Cold vs. The McMahons: June ‘99 from last week. Check out "Talking Taker” Alex & Travis are "digging up" the career of the Undertaker. You can now dig deep back into their archives and explore the 90's run of the Deadman. This past week was a Special Watch Along Edition with Mike & JV from the Bottom Line Wrestling Cast. Alex, Mike, & JV teamed up to watch Undertaker & Stone Cold team up at Fully Loaded ‘98.

This week on Talking Taker, Alex & Travis will be covering Undertaker vs. Randy Orton in a Hell in a Cell Match from Armageddon 2005.

Booking the Territory: The Unprofessional Wrestling Podcast - Mike Mills, along with his hilarious & informative team of Doc Turner & Hardbody Harper, break down episodes of NWA WCW Saturday Night from 85-88 and Smoky Mountain Wrestling from the start in 1992 and they are currently in 1995.

Join the Booking the Territory Patreon Page at Patreon.com/BookingTheTerritory at the $5 to join JV & Mike on their new venture, Extreme ECW Live Cast.

Check out Free Your Geek, this week is Ep 82: Premiers, Sequels, and Reboots